I’ve got to be honest, when this meetup’s talks were announced I honestly didn’t know anything about GraphQL – in fact the only mention of it I’d seen (or taken notice of) was this one;

So help me if you start shouting about GraphQL like it's "better" than REST I'll lose my shit. It IS lovely though. https://t.co/M1vhWiGkVQ

And with this in mind, and the fact the last AngularZone meet was so good, I was more than eager to make sure I went along… and of course it gave me a chance to sport my new MobileCaddy tee, too. 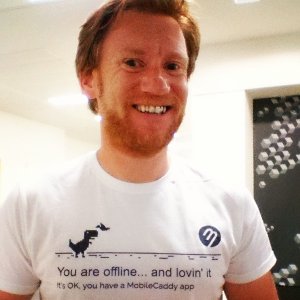 As well as these physical meets, Gerard has been putting on web based “JavaScript – Ask me Anything” sessions too, though I have yet to partake in those.

Now, I have some thoughts about the meetup and venue as a whole, but for now let’s jump straight into the talks.

PWAs are creating a lot of noise at the mo – and rightly so – and Dean “Deano” Hume was here to give us the latest lowdown on them, and talk about how their features can be used in the real world.

PWAs are built using an emerging set of web standards, and essentially offer web developers the tools to bring native-esq experiences to web sites and apps. Such capabilities include Push Notifications, Geo-location access and other hardware APIs including bluetooth and NFC. 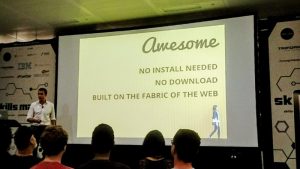 Part of the awesome-sauce that powers PWAs are Service Workers. These are also being pumped highly in the web dev world, and they enable support for many cool enrichments to standard “web sites” as well “web apps” (and no, I don’t know what the difference really is, or even if it’s important). I’ve seen many talks on Service Workers and on the whole they’ve been very good, and normally have covered different uses, approaches, and features. But one thing they all include is a statement like “Nope, sorry, Safari doesn’t support them”.

Service Workers provide a dev with the ability to intercept network requests before they leave the browser, and this can be used to provide offline handling, low-data requests and probably plenty of other use cases that haven’t yet been thought of. Speaking of which, Dean covered a scenario using Promise.race in a Service Worker that provided an improved experience for when a third party library failed to load, and meant that the page was able to load much more quickly – very cool.

Dean showed us a few other PWA features, including;

Along with the great demos and info, Dean also supplied an incredible amount of links to online demos and resources… so check out his slides for all the details.

Now, I won’t claim to understand what happened next. But it was fun, so I’m just gonna leave this picture here and you can make of it what you will.

Following on from this, erm… experience… Tracy and Gerard went on to tell us about ngCruise. This is a new Angular conference with a difference. Yes, you’ve guessed it, it’ll take place on a cruiseship. The website should be launching this week but the plan is for the conference/cruise to commence by bobbing out of Florida in May 2017, and will comprise of a few days of talks, programming and fun. Tracy is hoping it’ll be a few hundred USD per day and should include talks, food and of course accommodation (with a difference). CFPs should open soon.

Peter and Gerard gave us a nice little fireside-chat type thing, discussing the upcoming Angular Connect conference (27th/28th Sept). They mentioned how they were updating the format slightly, from last years conf, to try to emphasise some of the more interactive sessions. I can only imagine that the conference is going to be ace… as I’ve once again had to bail on getting a ticket.

Closing us off was Uri Goldshtein, who had literally only just flown into London. Uri is part of the Apollo team and was hear to give is an introduction to GraphQL, and although his talk title mentioned Angular, it was mostly a generic intro. This was fine with me as I had virtually no idea about GraphQL, whatsoever.

Now I won’t try to come across as a GraphQL expert following the talk, in fact if anything I have more questions now than before… so as well as writing down what I think I grasped from the evening, I’ll also suggest that you take a look at the GraphQL website for yourself.

But anyhoo, GraphQL was born out of Facebook, late 2011, at around the time Mark Zuckerburg dissed web tech for mobile, and went all native on us. It is designed to be a “Query language over your existing data”. It can be used to provide a middleware and protect your clients from evolving backend APIs and updates. It’s also type-based, and should allow for absolute understanding between what a client asks for, and what it receives. Part of this middleware behaviour includes splitting single request out to multiple backends, and bundling the responses to each up into a single response for the calling client. This kind of architecture can mean drastically simplified client code… and that’s definitely a good thing in my book.

Uri demoed Instagraph, built by Kamil Kisiela, and showed us a very neat GraphQL editor/runner called Graphiql. During the demo Uri spoke about how the use of GraphQL allowed for “optimistic UIs”. This is an approach where UIs update as soon as an action, such as liking an Instagram photo, is invoked, and that actually these changes take place before any round-trip to the server/backend is made. This approach is one that we automatically use at MobileCaddy, though we tend to include this under the Offline First banner, but it’s nice to know this specific UI handling has it’s own name too.

Despite Uri being a really passionate and captivating speaker, I’m not entirely sure I’ve “got” GraphQL yet – I don’t know whether it’s available simply through client side and server side libraries, or what transactional performance overhead, if any, comes into play. I would love the chance to see him and again and have a good chat about it all. With this in mind I think I’ll do some digging into whether or not I could sit GraphQL in front of Salesforce’s SOQL. So why not go out and start playing.

In all this was another excellent meetup, and Gerard deserves high praise for organising such great talks and food (burritos) and drink. The inclusion of prize draws (FREE TICKET to ANGULAR CONNECT) is a really good touch. Thanks to go to eSynergySolutions for sponsorship and assistance.

Sadly, turn-out was relatively low. I counted less than 50 attendees, which is a shame as well over 100 had RSVP’d “Yes”. I found that there was little chat among attendees, and I also noticed this at the previous meetup. Whether or not it’s due to the size of the venue, or the fact that folk were sitting in the hall before and between talks, rather than around the breakout area, I’m not sure. At other meetups I attend, these “before and after chats” are one of the really valuable and attractive things. Maybe next time the hall can be “closed” whilst talks are not on, and hopefully they’ll be a deliberate post-talks-chat arrangement too?

Regardless of the above I definitely recommend coming along to these AngularZone meets if you’re in and around London and have interest in anything JavaScript, not just Angular.