It had been over a year since I last attended a WordPress London meetup, and I’m so pleased to be back going along to them again. Last Thursday I trotted along to the City University lecture halls in Angel to get my fill of WordPress community goodness once more. 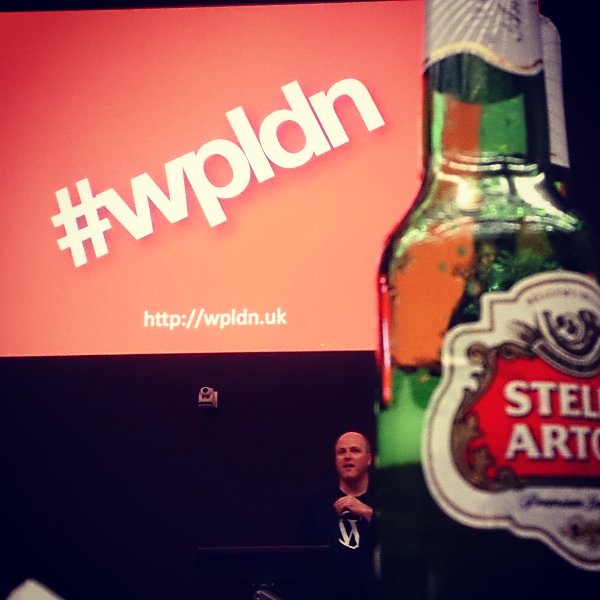 And for what reason did I start going along to these again? Well I have just recently released freemium WordPress plugin, called Turbo Widgets. This is an update to the five star rated Widgets on Pages plugin that I wrote and submitted to the WordPress plugin repo many years ago now. With this now out in the wild I felt that it would be good to get involved in the community again, and make sure that I’m up-to-date with the best practices, technology and, of course, gossip.

On my way into town I did the usual “search for the event hashtag to see of anyone is about for a cheeky half beforehand”… and loandbehold this popped up in the results… result!

I knew of Jenny from her move to HumanMade and her stunning work in the WordPress community; she was lead organiser of the amazing London WordCamp 2016, so who was I to turn down an invite like that. I had a cracking pint with her and mostly chatted about the recent WordCamp. If you ever get the chance to chat to her then you’ll find her passion something to cherish.

Onto the event, and the food and beer that was provided thanks to the evening’s sponsors, SiteGround, WP Engine and Beaver Builder. Some quick, and nice, chats were had and then the talks began.

Elliot shared what he’d learnt from taking on his SaaS offering YoGrow. He spoke of the journey from it being a plugin in the WordPress repo right through to it’s current state as a SaaS offering. He first spoke of the downsides of the public repo, and how it’s very hard to get a real valuable insight into the usage of the plugins. He said it was very hard to have a conversation with users, and to find out what features they like etc.

Failure is a guaranteed part of building a product

He also ran through some reasons to use WordPress as the platform for your SaaS project, and other tips that he’d picked up on his way to his current position. I haven’t found a link to his slides, yet, but he’s what I’d jotted down in my notes.

I also asked Elliot if he was ever concerned about uptime when he pivoted to a SaaS from a product. This worry is one that is right at the front of my mind when I ever think about setting up service businesses. Elliot was pretty dismissive of this, and said that there were top-notch WordPress hosting companies that took this worry off his shoulders, two potentials are actually sponsors of the meetup too.

Mark was next up, and gave us a technical talk on how a WordPress dev/admin could use Docker in their workflow and deployment. He started out explaining that he first started reading about Docker following a hack on one of his sites that quickly spread to his others. By using Docker, Mark is now able to sandbox all of his sites, so that any compromise is now limited in risk.

He then gave us demos of Docker in action. He showed us how to get a WordPress site setup, and how the various parts all fit together. To be honest I couldn’t do his talk justice, technically, so I’ll just link to his slides.

In my local WordPress dev workflow I currently use Vagrant through the wonderful VVV, whether I’ll switch to Docker for that I’m unsure, but perhaps if I ever take of my own production hosting then maybe I’ll give it another look.

I was so pleased to be at another local WordPress meetup, I honestly missed it, and the members, so much.

Dan appears to be doing a great job organising the meetups, and the wpldn.uk project (more about that in another post, to come) and deserves a huge thank-you, from at least me, on such a good night. Thanks also to the speakers and let’s not forget the sponsors.

The next meet has already been pencilled in for the 26th May (though check meetup for updates, as it may change), so mark it in your diary… and I hope to see you there.